Earlier this year, quite unexpectedly, I found myself directing The Gondoliers for the Gilbert & Sullivan Light Opera Company of Long Island.

It’s an opera I’ve directed twice before (in 1982 and 2006) and studied extensively for my book, A Most Ingenious Paradox: The Art of Gilbert & Sullivan, but I found that re-immersing myself in this charming Savoy classic was teaching me some new things about it.  I had literally memorized the opera on two previous occasions, but I found to my delight that there were still insights to be had and lessons to be learned.

Here are 10 things that you may not know about The Gondoliers, eight of which were new to me as well.

As I noted in my book, The Gondoliers: Or, The King of Barataria is constructed unlike any other Gilbert & Sullivan opera.  Its striking length is due in large part to the fact that it has two stories to tell, almost entirely unconnected.  Twice in the first act and once in the second act, the action essentially stops dead in order to introduce an entirely different set of characters with entirely different issues and motivations.  Each opera has a complete cast, and (except for the Act II finale) it would be theoretically possible to present either independent of the other and have a satisfactory theatrical experience.

One opera, which I’ll call “The Gondoliers,” is about a group of Venetian gondoliers and their ladies.  Its cast includes Gianetta (soprano), Tessa (mezzo-soprano), Marco (tenor) and Giuseppe (baritone).  It’s a light-hearted romantic comedy about two penniless couples whose happiness is disrupted, first by the discovery that one of the gondoliers may be an immeasurably wealthy king and then by the discovery that the one who is the king Is already married to someone else.  The Italian opera is romantic more than funny, and it ends happily, with the gondoliers and their wives once again penniless but happily married, returning to Venice to resume the lives that were so rudely interrupted—“on one point rather sore, but on the whole delighted.”

The other, which I’ll call “The King of Barataria,” is about an impoverished Spanish nobleman and his family.  Its cast includes Casilda (soprano), the Duchess (mezzo), Luiz (tenor) and the Duke (baritone).  It’s a political satire about Casilda, the Duke’s daughter, who is happily in love with Luiz, one of her father’s servants—obviously a love that must be kept secret, as he’s far from an eligible suitor—until she learns that she was secretly married in infancy to the long-lost son of the immeasurably wealthy King of Barataria.  This marriage stands to be the making of her family, but at the cost of her heart.  The Spanish opera is filled with social and political satire, is funny more than romantic and ends happily with the discovery that Luiz is the long-missing king.

In many respects “The Gondoliers” is the kind of opera that Sullivan liked to write, while “The King of Barataria” is the kind that Gilbert liked to write.  The two had been at odds early in the opera’s gestation, in the so-called “cipher quarrel,” and this structure may be seen as Gilbert going out of his way to see that each man got what he wanted.  (The plot element of the two gondoliers ruling Barataria jointly—on condition that they work hard and not put on airs—may be seen as Gilbert needling Sullivan, whom Gilbert considered indolent and prone to put on airs.)

The opera has two sopranos, two mezzos, two tenors and two baritones, but only one bass (setting aside the minor role of Giorgio).  Don Alhambra is the pivot point between the two operas.  A Spaniard living in Venice, he is the only one who knows all eight of the other principal characters until the Act II finale, and it is his manipulations that bring about the disruption of both the romances of Marco, Gianetta, Giuseppe and Tessa and the romance of Luiz and Casilda.

Don Alhambra thinks of himself as a puppetmaster, working behind the scenes to bring about the resolution that he wants to see (himself as the power behind the throne of Barataria).  He’s actually a screw-up, though:  His failure to make note of some distinguishing trait to allow him to identify the stolen child is the source of all the chaos in the story and, of course, it turns out in the end that he’s been outmaneuvered by the baby’s nursemaid, Inez, a smart cookie who has played him since before the opera even begins.

That’s to be expected, because Don Alhambra ignores people like nursemaids or, indeed, women in general.  In the entire opera, the only woman he speaks to by choice is Casilda, and that’s because he knows she’ll be queen and wants to stay on her good side; he brushes off the duke and duchess, and speaks to Marco and Giuseppe (for whom he clearly has nothing but contempt) only because he believes that one of them will be king, and wants to stay on his good side.

There are only 46 lines spoken when only Italians are onstage, versus 103 for the Spaniards, despite the fact that that the Italians have roughly 2/3 the total stage time.

This is, of course, because the Italians have the opening number and the Act I finale, which between them make up 45 minutes that’s entirely music.

It’s also worth noting that the Spaniards typically talk much more than the Italians, whose dialogue is usually to the point and free of rhetorical flourishes.  There are 26 dialogues that take up five or more lines in the Modern Library edition of the operas, and 19 of them are by Spaniards.

Setting aside the early Thespis and the one-act Trial by Jury, in which all the characters appear together for most of the operetta, there are only six instances in all the Savoy operas in which two or more major characters share all their stage time.  Three of them are in The Gondoliers: Marco and Giuseppe, Tessa and Gianetta, and the Duke and the Duchess.

This isn’t necessarily significant of anything major, but it’s interesting that Gilbert chooses to structure his opera this way, particularly in the wake of his most major quarrel to date with Sullivan.  If you see echoes of their personal relationship in the opera (as I do, and as some people—including the creator of a famous cartoon—did at the time), it’s certainly possible that Gilbert was modeling friendship and collaboration to his increasingly restive partner.

(Don’t strain your brain:  The other three are Arac, Guron and Scynthius in Princess Ida; Scaphio and Phantis in Utopia, Limited; and Kalyba and Nekaya in Utopia, Limited.  OK, and the Prince and Princess of Monte Carlo, if you consider her a major character, which I don’t.)

The opposite of togetherness is solitude, and there’s only one Gilbert & Sullivan opera in which there’s no scene in which a character is alone onstage.  That opera is (drumroll) The Gondoliers.  Again, not indicative of anything in particular, but distinctive and suggestive.

The underlying plot of The Gondoliers closely mirrors the story of the English Civil War, in which a Catholic king was overthrown by a Protestant uprising and executed.  His son was spirited overseas, and ultimately succeeded his father after the insurrectionary forces were overthrown.

Gilbert has the king of Barataria convert to Protestantism, rather than be executed (as Charles I was in 1649), and then killed in a Catholic uprising 20 years later.  However, the broad outlines of the story would be familiar to the Savoy’s audience—and to anyone who had ever attended school in England—and it’s unlikely that the resonance is accidental.

Charles II was more partial to actresses than to dukes’ daughters, but he cast a wide net (he sired at least a dozen illegitimate children) and may well have had his own Casilda.

7. Count Matadoro, Baron Picadoro and Groom of the Back Stairs.

There are two main jokes about Pooh-Bah, the comic bass-baritone in The Mikado.  One is that he is a nobleman who exploits his status for financial gain (“I go and dine with middle-class people on reasonable terms.  I dance at cheap suburban parties for a moderate fee.  I accept refreshment at any hands, however lowly.”), and the other is that he’s a predatory bureaucrat who holds multiple positions and profits from them all.

The two jokes are not inherently related, and after his first scene the former joke fades away, subsumed by the latter joke, which runs throughout the opera (“I am the Registrar.”).  However, clearly Gilbert felt that it was a good joke that deserved more substantial treatment, so he revives it for Act II of The Gondoliers, notably in the song “Small Titles and Orders.”  (He’s right, it’s a good joke.)

Gilbert had a bee in his bonnet about the Joint Stock Companies Act of 1862, which established the concept of limited liability as we know it today.  He saw it as a license for people to default on their debts—as legalized theft—and was outraged that nobody else seemed to feel that way.

Time has largely relegated Gilbert’s position to the ash heap of history (though I’d love to hear what he’d have to say about the Citizens United decision), and it lingers mainly through the survival of two consecutive operas in which Gilbert holds the act up to ridicule.

Like Pooh-Bah, the Duke of Plaza-Toro has two basic jokes, one about a nobleman who exploits his status for financial gain and the other about a man who incorporates himself as a joint stock company.  As with Pooh-Bah, one of those jokes swamps the other one:  Though the Duke and his family are shown to have become wealthy through his incorporation as The Duke of Plaza-Toro Ltd., the idea isn’t really explored.  The chicanery described in “Small Titles and Orders” is unrelated to his incorporation, and everything he describes he could have been doing for years if he’d thought of it earlier.

Just as Gilbert thriftily recycled the only-slightly-used joke about Pooh-Bah monetizing his social prestige, so he recycles the overlooked Duke of Plaza-Toro joke for use in Utopia, Limited.  To my taste the prestige-as-a-cash-cow joke is funnier than the incorporation-as-a-scam joke, and that surely contributes to the fact that Utopia, Limited has always been less successful than The Gondoliers.

There are only two Gilbert & Sullivan operas which take place in the same year (assuming that the contemporary-set operas are intended to be set in the years of their premieres, as is demonstrably the case with The Pirates of Penzance).

They are The Gondoliers and The Grand Duke, both labeled “Date: 1750.”

That year is notable for various events, include Bach’s death; the first professional performance of Shakespeare in America; the births of Antonio Salieri and Henrietta Maria Bowdler (the latter celebrated in Princess Ida); a major London earthquake (major by English standards, anyway); the founding of Hasidism; the first recorded crossing of the Cumberland Gap; the umbrella’s introduction in England; a catastrophic fire that leveled Halifax, Nova Scotia; the openings of the Louvre Museum in Paris and the Westminster Bridge in London.  It’s also the year from which the Industrial Revolution is generally dated.

But there’s no obvious connection between any of these and The Gondoliers or The Grand Duke, let alone both.

A possible connection between the two 1750 operas appears in the Herald’s song from The Grand Duke, which is strikingly appropriate to the situation of “With Ducal Pomp and Pride” in The Gondoliers, written seven years previously.  I’ve always wondered if it was cut from the earlier show, and had originally gone:

I’ve never found any evidence that it was a holdover from The Gondoliers, though, and the forced rhymes of “oughter” and “partickler” make it seem like a product of the Gilbert of 1896, who thought that “shoeses” and “ghoest” were words. 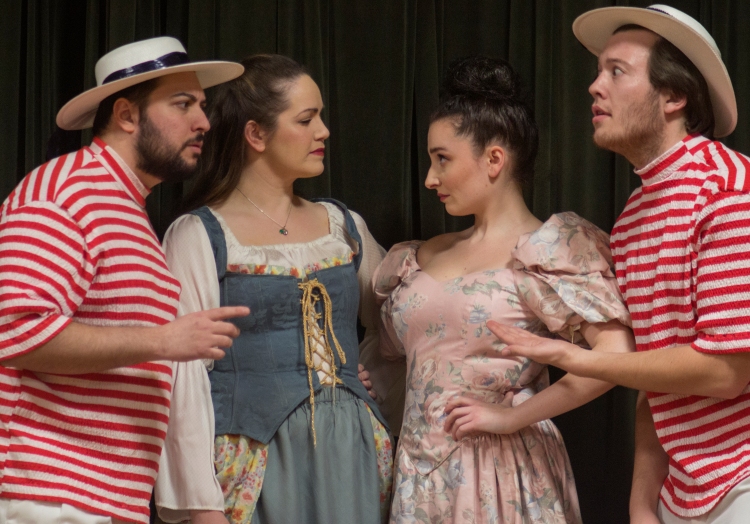 A contemporary cartoonist was among the people who saw allusions to the personal relationship of W.S. Gilbert and Arthur Sullivan in the plot of The Gondoliers.